Get rid of Win32.Brontok virus

on March 4, 2010
Since more than 2 years I have been using Windows XP Home on my personal laptop without any antivirus software installed and I have never had any virus problems. But few days back My machine was infected with win32.brontok virus and IE and Mozilla browsers started crashing immediately after launching them. It used to popup below window 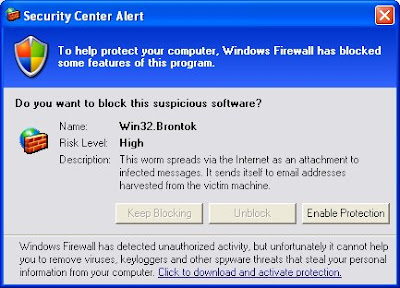 I realized that my system was infected with virus but had no clue in identifying the virus and removing it. I installed the latest Malicious software removal tool offered by Microsoft but of no use. This tool was not able to detect the above virus.

Then I was weighing on the option of reformatting my system but luckily I had found this trial version of SUPERAntiSpyware. I installed it and did a complete scan of the system and it detected around 50 threats. I could remove them all using the same software and after reboot my system has started functioning as usual.

Next post: you do not have permission to update windows