Standard HTTP protocol includes commands like GET, POST. Webdav adds commands like COPY, MOVE, DELETE, MKCOL etc. to support write operations. Webdav is a standard and is not proprietary to any organization.

Like any network protocol, Webdav also involves two machines interacting with each other. The server side of Webdav is integrated with Web servers. All the web servers are added special modules/extensions to understand and deal with Webdav protocol. In IIS it is added as an extension and web administrators can enable/disable this Webdav extension according to their requirements. In Apache, it is added as a dynamically loadable module. We can also link it statically while compiling apache code.

Now the client part – We need special software on the client machine to interact with the web server using Webdav protocol. Windows operating system has two built-in features supporting dav client. One is web folders and the other is Webdav redirector. We’ll look into both of these in other articles.

Webdav extension is disabled by default when we install IIS server. We can enable it in the following way.

We can access a WebDAV folder in the following ways.

Using net use command we can access WebDAV folders exactly in the same way we access SMB shares. Suppose we have a DAV folder DAVShare on a server Dataserver. Then we can access it using the below command.

WebDAV is nothing but an extension to HTTP protocol. So almost all the browsers have the capability to interact with WebDAV Folders. We can mention the path of the WebDAV folder in the browser address bar and open it like any http URL.

Webfolders is a webdav client  provided by Microsoft for windows operating system. It is partially integrated with IE and is installed along with OS on Windows XP and Windows Server 2003.  Open Internet explorer, click on File menu and select Open. You will see a window like below. 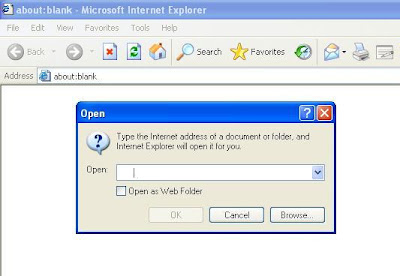 As you can see in the above picture, there is a check button provided to specify if the URL to opened is a webdav share. Select this check button while opening webdav shares and the share will be opened in explorer where you can do all file system operations like creating new files and folders, deleting files and moving files.

Next post: Recent documents missing in Start Menu in Windows 7